The middle of October was a mixed bag with Mother Nature. The winds ramped up last week and the Tropical Cyclone “Vincente” began to form south of us off the coast of Belize. Vinny sent some upper bands our way which made for some challenging weather at both lodges towards the end of the week but both groups of Anglers held strong and took advantage of breaks in the weather.

The crew from Casa last week consisted of our good friend John Stout and his son Jeff who flew in from the Great White North. John brought with him Larry and Phil as well, Phil returning to the island after a 20 year hiatus. Adding to the group was first timer Austin. The boys got off to a good start putting a bend in the rod with a bunch of Bones and spent a few hours mixed in looking for Permit. The Permit were located in Ascension Bay but had lock jaw for the most part. With the unpredictable weather and stubborn black tails the group mainly stuck to the backcountry and enjoyed some steady action. Father and son took to the Tarpon lagoon midway through the week and came back all smiles after consistently finding fish and releasing Tarpon and Snook.

Down the road, it was the return of Doc Jeff Kozak and his gang for the annual “Jack Off “Tournament. Kozak returned this year with Joe, Jack, Ron, Armand, Carl and Kyle. The first day produced a scorpion eater when Kyle released his first ever Permit while taking to the Salt for the first time ever. Dr. Kozak also released a 30” inch Palometa. The week continued and Jeff put another Permit in the boat while Joe added to the Black tail numbers and Kyle stuck a few Poons in the Tarpon Lagoon. The weather began to deteriorate but the guys stayed busy releasing multiple good sized bonefish. Armand and Carl were the standouts on the Bonefish flats, which had Armand polishing hiss skills after his initial saltwater trip with us in July. The storms cleared on Friday and Jack got on the board with a nice Snook. It was great to see all the familiar faces last week and we thank all the fisherman for their great attitudes while dodging some unpredictable weather. 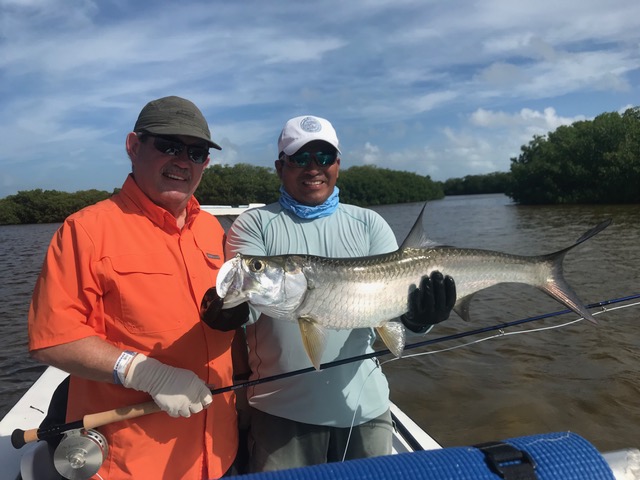